Manga creator Hiro Mashima announced on Friday that his Edens Zero manga is getting a television anime adaptation. He asked fans to "Stay tuned for incoming updates!" This year's 28th issue of Kodansha's Weekly Shōnen Magazine teased on Tuesday that the manga would have an "important announcement" in the magazine's next issue on June 17.

Kodansha Comics publishes the manga in English both digitally and in print, and it describes the story:

At Granbell Kingdom, an abandoned amusement park, Shiki has lived his entire life among machines. But one day, Rebecca and her cat companion Happy appear at the park's front gates. Little do these newcomers know that this is the first human contact Granbell has had in a hundred years! As Shiki stumbles his way into making new friends, his former neighbors stir at an opportunity for a robo-rebellion…And when his old homeland becomes too dangerous, Shiki must join Rebecca and Happy on their spaceship and escape into the boundless cosmos.

The most recent and final anime season based on Mashima's manga premiered in Japan in October 2018. The anime series ended last September with 328 episodes. Crunchyroll and Funimation streamed the anime with English subtitles. Funimation also streamed an English dub. The manga has inspired two earlier television anime, two anime films, several original video anime projects, and spinoff manga. Kodansha Comics publishes the original manga and a number of its spinoffs in North America.

If you happen to be a fan of Fairy Tail, then you will be excited to hear of this announcement! I certainly know that I've been waiting for this announcement, ever since Hiro Mashima unveiled the Edenz Zero manga. 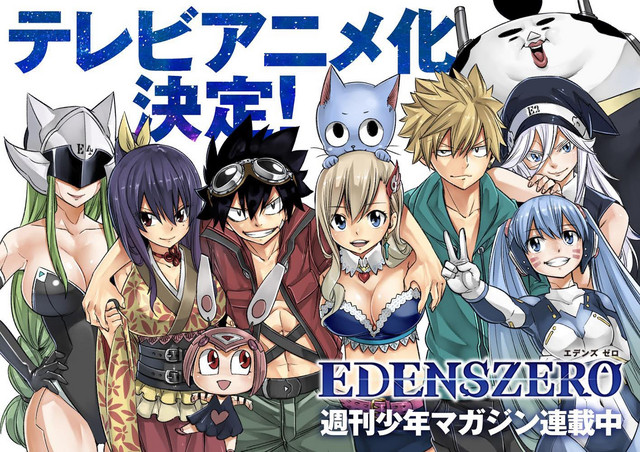 Synopsis of manga:
"A young boy gazes up at the sky and sees a streaming bolt of light. The friendly, armor-clad being at his side tells him gently, "That's a dragon." The fact that he's joking isn't important. What's important is the look of wonder on the boy's face... and the galaxy-spanning adventure that's about to take place!"

I wasn't biggest fan of Fairy Tail so I haven't rly kept up with Hiro Mashima's work. I have read his first work Rave Master though which was alright for shonen, definitely very shoney though and Fairy Tail appears that way. Looking at synopsis and the picture I don't think this will be that different from his previous works, we are going to get some shonen action with lot of fantasy elements, comedy and fanservice. But I'm sure there is fans for that kinds of work too, as Fairy Tail is rly popular. But yup, will probably skip this one myself.
Expand signature
-------------------------♕ VIPJACK ♕-------------------------

Oof, i made thread about this, didn't check previous threads as there usually isn't tons of anime.. I guess I will ask for merge

Darth_berries said:
Oof, i made thread about this, didn't check previous threads as there usually isn't tons of anime.. I guess I will ask for merge

Darth_berries said:
Oof, i made thread about this, didn't check previous threads as there usually isn't tons of anime.. I guess I will ask for merge

I don't often make anime threads. But I've been waiting for the anime adaptation of Edens Zero, ever since the manga was released
Expand signature

Ah yes the Fairy Tail I'm even less interested in, maybe I'll try it out since there aren't a million episodes to go through
Expand signature
〔 Let BEAUTY be expressed through GRACE 〕

SeulPika said:
I don't often make anime threads. But I've been waiting for the anime adaptation of Edens Zero, ever since the manga was released
Click to expand...

Darth_berries said:
Yup, at the moment it's usually just me who makes animes news threads so there isn't need to check if someone else has already posted
Click to expand...

I used to be a staff member on two Anime forums, and my main role was posting news updates on Anime. But that was when I had more time on my hands
Expand signature