BDC (비디씨) or 'Boys Da Capo' is a three-member group under Brand New Music. Their lineup is; Sihun, Seongjun, and Junghwan. Their name means, “Boys, return to the beginning and start again”. Likely derived from the Italian term "da capo" used in sheet music, but it also has a symbolic meaning in that they will never forget their roots and continue to put out their best.

The name, Fine, comes from "Da Capo al Fine", which means; repeat from the start until finish. BDC will forever have Fine to the end, so fans will forever be with them.

PRE-DEBUT
Before the three boys formed BDC, they were part of MNET's survival show, Produce X1, under Brand New Music alongside Lee Eun Sang. Only Lee Eun Sang made it to the finals, so he was allowed to be in the group, X1. After being eliminated, the remaining three boys went on to debut together as BDC. 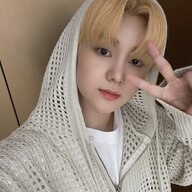 They made a cameo on Let Me Be Your Knight!!

I'LL BE A STAR Artist Threads: BDC╽bugAboo╽NIK╽Onew​
You must log in or register to reply here.