RandAlThor said:
Woot we made it :)
Click to expand...

And those Inkigayo stages are among the prettiest I've ever seen. Nice to get the pics for them.
Reactions: OnlyCalB and RandAlThor

dnb said:
And those Inkigayo stages are among the prettiest I've ever seen. Nice to get the pics for them.
Click to expand...

yes they are
its just too bad that astro hit that big popularity bump now other wise her numbers would have been good enough. For example she did much better than OOTN and i think zim and uu which all won the week.
Expand signature
SNSD Red Velvet Apink IZ*ONE gfriend f(x) Lovelyz Bol4 Gugudan

Here's a thread with upscaled photos: 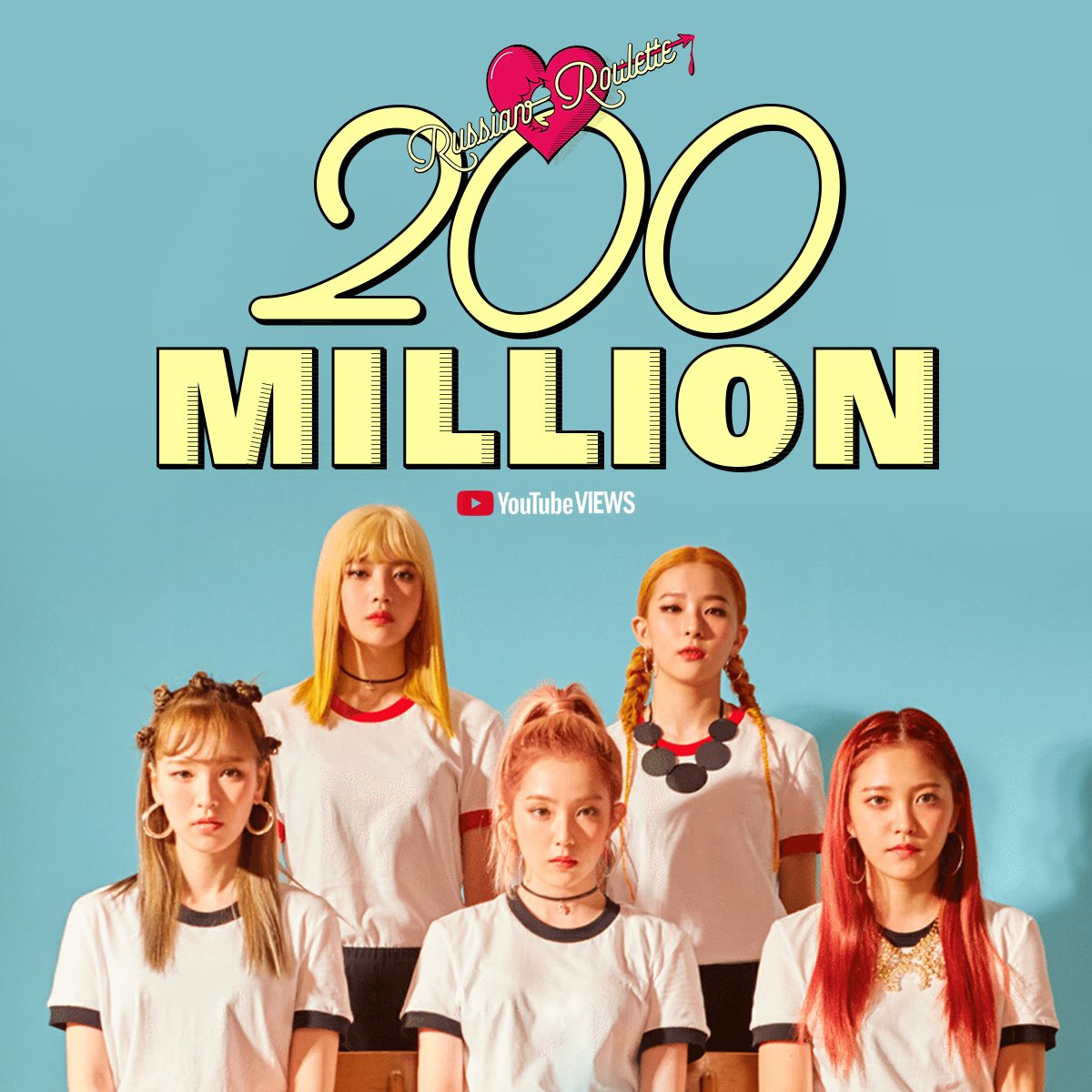 Here's an interview with Seulgi and Kim Zakka. Thanks to KSGUpdates for posting. 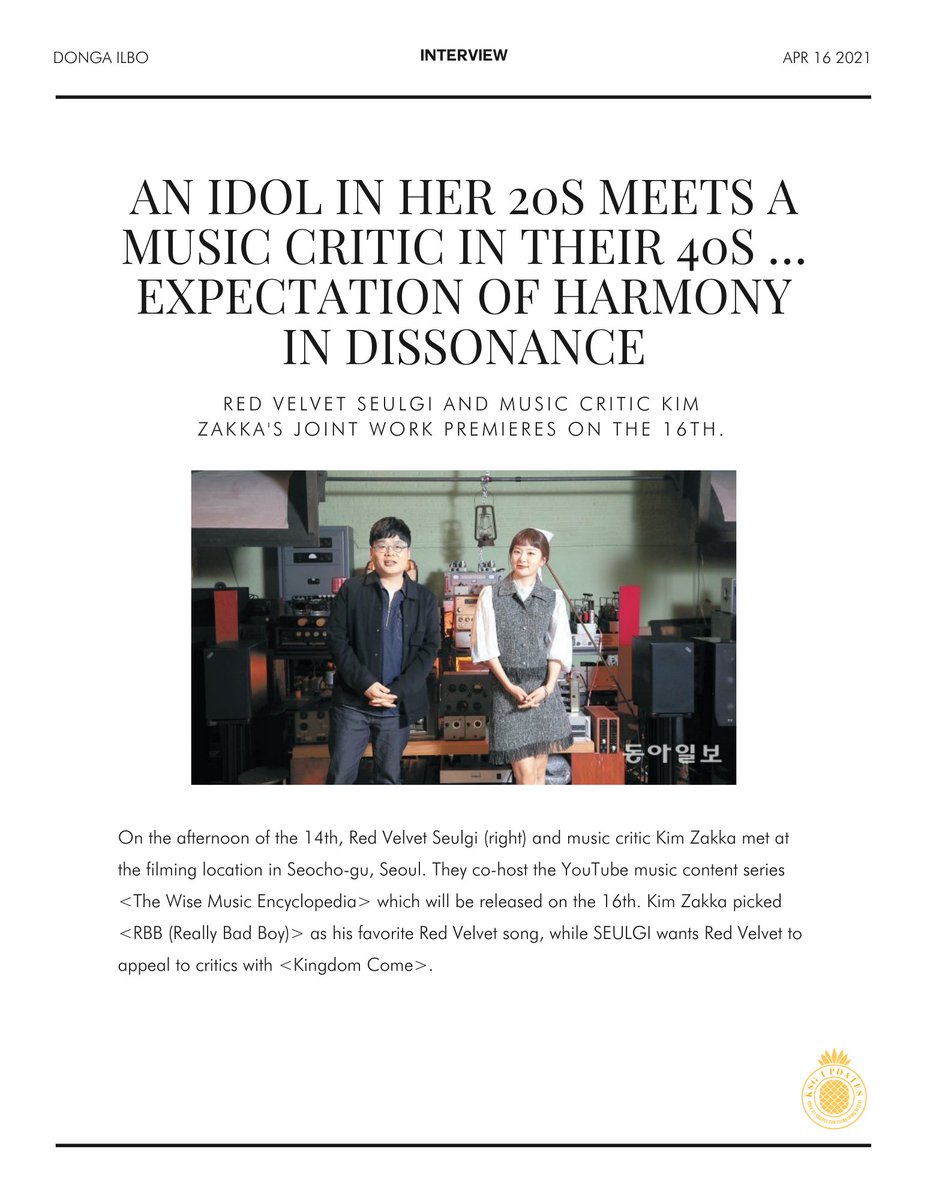 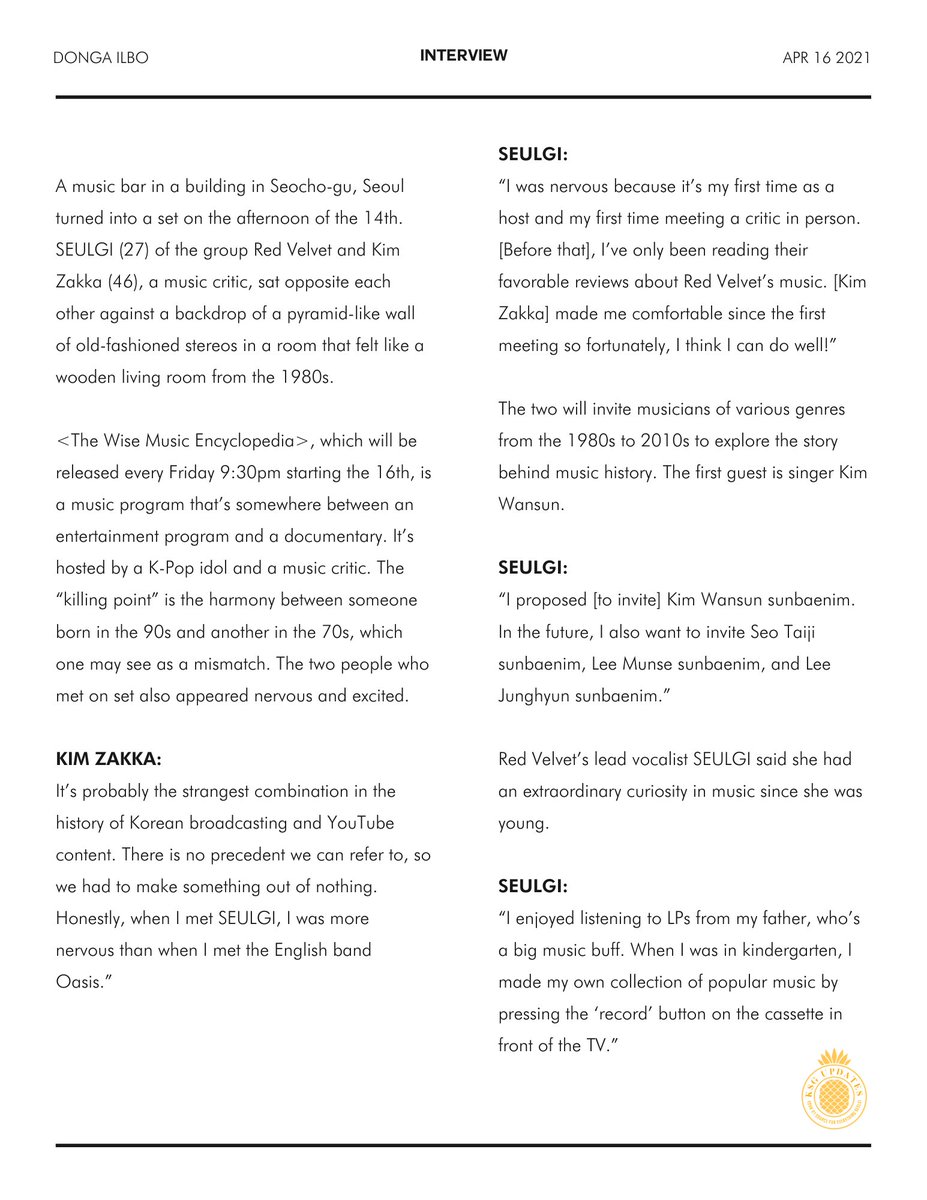 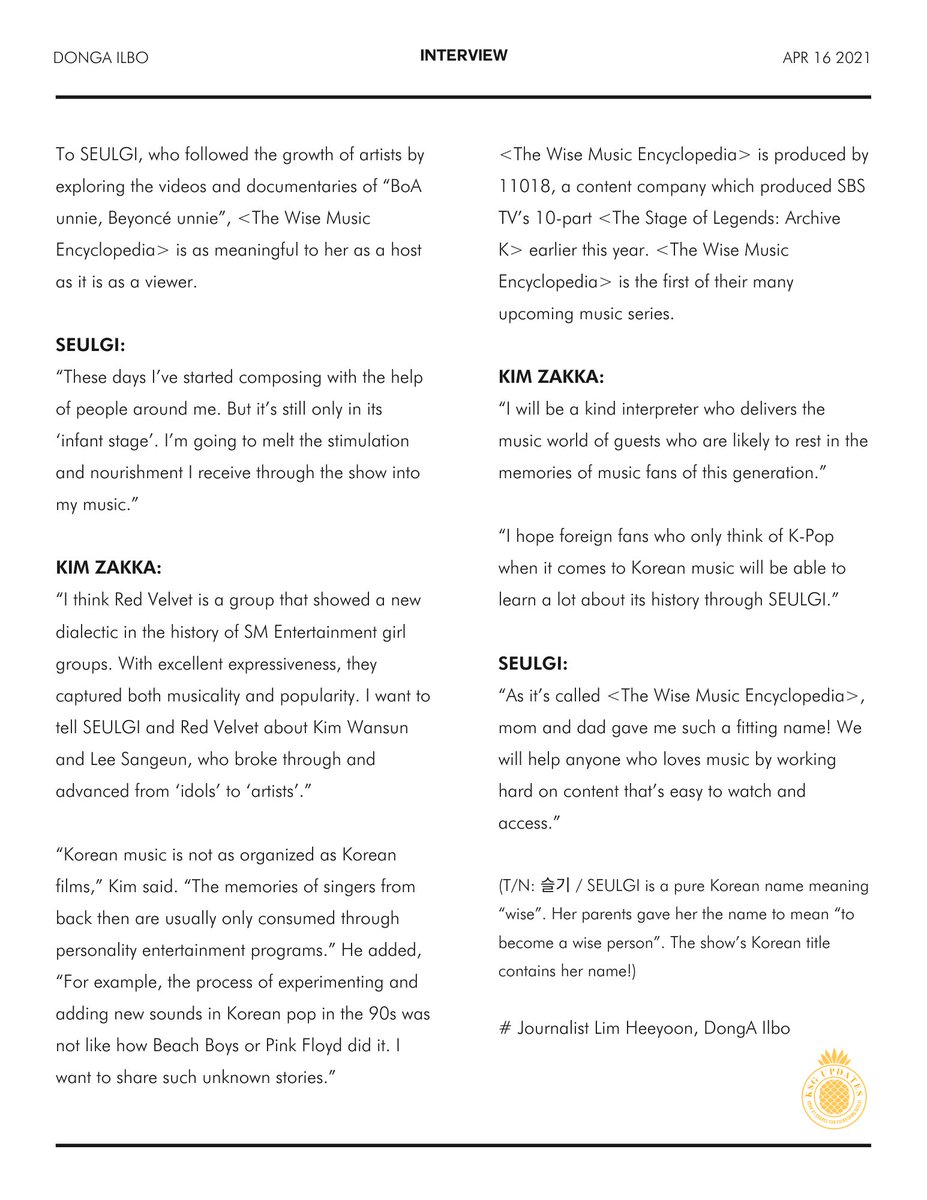 Moonshine (Jonathan Gusmark and Ludvig Evers; worked on Peek-A-Boo and many other songs) recently held an Ask Us Anything session on reddit.com. Here are some excerpts.

​
I'd have to give that one to Red Velvet's Perfect Velvet for a couple of reasons; It was our first release in Korea ever, we got our entire concept through of having the creepy "Scooby-Doo" vibe in the MV & concept pics and all the songs on the album are fire!!!​
​
Do you guys have any stories of your times working with Red Velvet? Did you get to interact with them at any point throughout the recording processes? Thank you for doing this AMA!

​
Don't know if this counts as "working" but we had Wendy swing by our studio one day when we were at a camp at SM. She chilled in our studio while we were finishing up a song for Red Velvet, we let her have a listen to it & showed great interest in how the song came about.​
​
She was so sweet & it was very fun and interesting talking to her about music & her experiences as a K-pop Idol!​
​
It's a shame we haven't been able to see Red Velvet live yet, but fingers crossed we will after the pandemic :)​
​
What’s the big difference between producing your tracks for SM like One, Peek a Boo, Turn Back Time etc with non-SM songs like Dance the Night Away, Room Shaker, Chase You Down etc? Is the process/A&R different or similar?

​
I'd say the biggest difference making songs for SM is the amount of harmonies & backing vocals that the song has to contain. SM also tends to be more open-minded to more "bold" and risky songs, which gives us more freedom to go crazy with the tracks :)​
​
Have any of the idols that you've worked with surprised you in some way?

​
We´re constantly blown away by how much talent so many of the idols have. But the latest time we were completely speechless was when we saw Irene&Seulgi's dance performance in Naughty.​
​
What kind of home studio equipment would you recommend? Are there any specific PC/Macs, speakers, instruments, DAWs, etc. that have been working really well for you and you'd suggest to aspiring songwriters and producers?

​
I'd say the biggest mistake people make in the beginning is believing that certain DAWs, speakers, synths etc is what makes one into a good producer. With DAWs being so advanced these days almost any DAW will do the job. However, the most important thing to invest into their music-making is time! So I'd recommend beginners to pick a DAW that has a lot of tutorials available online (FL Studio, Ableton, Logic to name a few). Other than that you only need a laptop and a good pair of headphones (We use the Audio-Technica ATH-m50x's) :)​
​
[Included this only because they use the same headphones as I do. Lots of Korean radio shows use these headphones as well. - dnb]​
​
Have you ever leaked info about a comeback or accidentally revealed too much about an unreleased song?

​
I think we have a quite clean record of not spoiling anything, and we're trying to keep it that way since that ofc causes a lot of problems for the labels releasing our songs! BUT our publisher had someone secretly filming while he was paying the demo for Peek A Boo without him knowing. It's kinda fun to see the comments of people really wanting to hear the original demo! But we truly believe it's better to not know how the soup is made. Unless you have A LOT of cash, in which case, DM us! (that's a joke btw)​
​
The Bass of RedVelvet - Naughty is amazing. What kind of register are used to make that bass patch? I think the upper bass part is really unique. Glitchy? Bass Sounds

​
We´re so happy that you like it. It´s kind of a secret recipe ;) But oftentimes the secret can be to process the sounds in a creative way. And to use distortion... A lot of distortion...​
​
I was wondering how your experience was like working with Wendy from Red Velvet? I understand that she visited you guys in the studio once (along with Cazzi Opeia & Ellen Berg). She recently released her first solo album, how interested would you be to work with her on her second solo album? :)

​
She only swung by the studio for an hour or so on her day off so we didn't have enough time to write anything with her. However, we'd love to work with her!! We're just waiting for the memo from SM lol! :)​
​
Reactions: OnlyCalB

Live versions of When This Rain Stops, Like Water and The Road:

https://www.forbes.com/sites/hughmc...-wendy-on-going-solo-i-had-to-believe-myself/
Here are some excerpts:

McIntyre: Red Velvet is hugely successful. When you found out you were going out on your own, were you nervous to live up to that same level of success? To all the expectations?

Wendy: First? Yes. I was, I'm not gonna lie, but...I had to go on my own. I knew I couldn't fulfill those expectations. I had to believe myself. And I had to find my own color as a soloist, Wendy. I thought that that would be my job, to just show myself. So I didn't worry about that at all.

McIntyre: So how did you go about finding that sound and finding who Wendy is musically versus the group?

Wendy: It was kind of hard at first, but then my company and my A&R team and my staff helped me out. They helped me listen to different types of songs. And when I was really confused about finding my own color, they would suggest to me, or they would leave me to find my color. And finally, my album came out like this.

McIntyre: Like Water has a pop-rock/ballad sound. What led you in that direction? What brings you there?

Wendy: Before the album came out, I told my A&R team that those genres are the genres that I love, that I'm into these days. And then they requested those kinds of genres to the writers. Yeah. So some of the songs were actually written just for me. That was the start that I was able to find my own colors from then

McIntyre: The single is “Like Water.” Is that your favorite on the album or do you have another one that personally touches you?

Wendy: All five songs are precious to me. Cause it's my first solo debut album. And also it's all my stories. So all five songs...I can't really pick one!

McIntyre: So this EP is out and you're going to promote it. What's next for you? Are you already thinking next? Are you thinking more Red Velvet?

Wendy: Well, first I'm just focusing on my solo debut album Like Water, and then probably our group Red Velvet, because people are waiting for us. We'll be back soon.
​
Reactions: OnlyCalB

Wendy's Instagram Live, with English subs thanks to warmblue:

Reactions: OnlyCalB
You must log in or register to reply here.