part 2 structure gp v pd Just how messed up it was. (1 Viewer)

I had started to move past the cells/ start, but after some thought and the video i linked at the end. I have decided to revisit it.

First of all splitting them into groups while it provided an illusion of fairness is fundamentally flawed.
It made us and them think of them as first and foremost some country group members.
so we have 33 girls from each of 3 countries, with strong national identity, Millennia of conflict between each of said countries.
Not 99 girls each trying to get into a team.
Shoot even now when folks try to break it down we talk in terms of CKJ Groups.
Is it any surprise that voters for the groups countries leaned very heavy to their own group.
its what they do in politics u v them.

Then Ranking each girl in each group biased on off camera evaluations........
Way to rig the game and set the narrative, and hammer to confidence of most of the girls all in one shot.

Every where they go shirts colored by not skill level which was before but group with an number that is the girls rank in the group.

The as each mission comes folks watching are forced to see the girls from their group stuck with other girls and then teams made of cells and not people.

Round 2 missions they split em but only a certain number of each group can join a song.

See the trend and pattern.

They had balkanized the entire viewership each wanting to promote their group.

So the fans organized and we had voting that was a complete illusion until the very end.

It turned out so lopsided because they never did get enough ppl from the world to counter the even minimal interest in Korea.

Raw votes from Korea were more than the rest of the world, and I would guess they expected that to not be the case when they started setting the show up years ago.

Raw votes from the app. 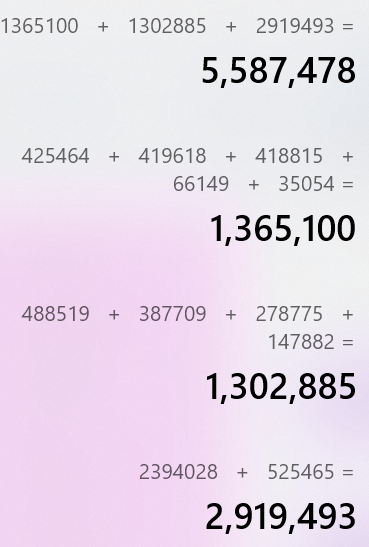 And its not like those 9 int girls were not known because mnet cherry picked em from the start.

So they made a very bad assumption at the start that the global vote would significantly favor the non Koreans.
Thus the 50/50 split to vote weight.

And they did such a good job of getting the Korean vote locked into the Korean contestants thru just the basic manipulation of group and cells. That the editing was just over kill.
look at the early rounds where the k vote went. In most cases it was concentrated in the girls' mnet set up as the int stars as a 'safe vote' while the bulk of the other girls got very little time to build a real fan base. And the stars fan base was not real, because they were not girls but the face of the enemy groups and thus things to be beat.

The produce show made less of an issue of nationality so girls were able to build a fan base.

As to voting. in general i am not sure there is a way to make it secure and fair.
Maybe AKS has it right make ppl buy some physical thing to vote. Its still subject to mass buys and almost any price would make the rounds very expensive.